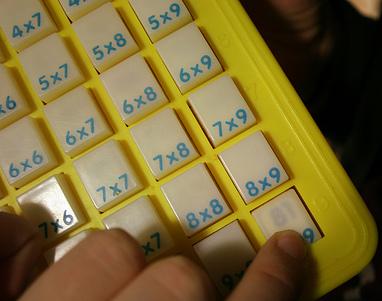 I’ve been working on a book of math games for homeschoolers and other teachers. I hope to get it published later this year, but the editing drags on. Would anybody like to draw the illustrations?

Meanwhile, here’s a 2-player game your students may enjoy…

Print out a blank times table chart and place it between the players. Each player will need a colored marker, and the colors must be different enough to be easily distinguished.

Remove the jokers and kings from a deck of poker-style playing cards, but leave the jacks (= 11) and queens (= 12). Shuffle the deck, and place the stack face down as a draw pile.

On your turn, flip two cards. Multiply them, and if that square is blank on the times table, write in the product with your colored marker. If the player writes the wrong answer, the other player may challenge the square, give the correct product, and then mark that square for himself by coloring it in his color.

Sometimes you will have a choice of two squares, but you may mark only one of them. On the other hand, if all the squares with your product have already been marked, then you lose that turn.

The first player to mark three squares touching (with no gaps) in a row—horizontally, vertically, or diagonally—wins the game.

Save paper by putting the times table chart in a clear sheet protector and using dry-erase markers. To make the squares easier to identify at a glance, students may mark X or O over each number after the other player agrees that the answer is correct.

This post is an excerpt from my book Multiplication & Fractions: Math Games for Tough Topics, available now at your favorite online book dealer.