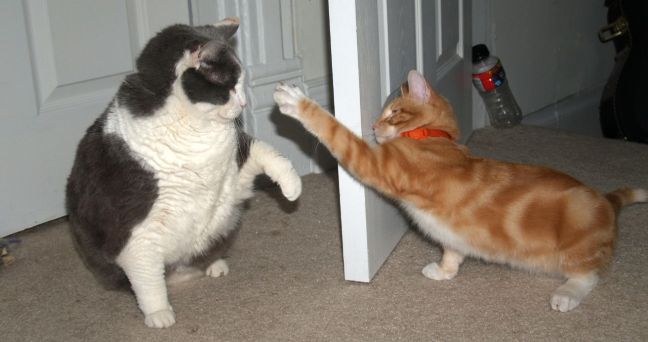 I believe this was the first math game I ever invented. Of course, ideas are common currency, so I’m sure other math teachers thought of it before I did. But to me, it was original.

I’ve blogged about the game before, but here’s the updated version as it appears in my new book Prealgebra & Geometry: Math Games for Middle School — scheduled for publication in early 2021. Sign up for my newsletter to get updates.

Equipment: playing cards (two decks may be needed for a large group).

Aces count as one, and face cards as ten. Agree on which color represents negative numbers. At our house, we play with accounting colors: Black cards are positive numbers, and red cards count as negative. But some families like to use the electrician’s standard that red is positive, black negative.

Choose one player as dealer. The dealer gives each player one card face down and then turns one card face up beside each face-down card.

Players do not pick up their cards.

You may peek at your own face-down card as often as you like, but keep it hidden from the other players until the end of the round. The face-up card remains visible to all players.

Mentally add the numbers on your cards, taking into account both positive and negative integers. Your sum may go below zero.

When all players have had time to check their cards, the dealer asks each in turn whether they want a hit — an extra card dealt face up so everyone can see it. If you want the extra card, say “Hit me!” Add your new card to your running total, but don’t say your sum out loud.

Last of all, the dealer may take a hit.

Then each player can ask for a second hit, and then a third, up to five hits (for a maximum of seven cards). Players may hold — stick with the cards they have — at any time, but they may not change their minds later and ask for a hit. The round ends when all players have either held or taken a total of seven cards.

At the end of the round, players turn their hidden cards face up and announce their scores.

The player with the lowest absolute value — the sum closest to zero, whether positive or negative — wins the round and becomes the new dealer. In case of a tie, the dealer hands the deck to any player who hasn’t dealt recently.

Do you hate relying on luck? Add a bit of strategy to the game by allowing the ace to count as one or eleven, player’s choice.

The dealer could allow each player to take his or her hits all at once, then move to the next player. But with my students, that system allowed children too much idle time between turns.

Integers are the positive and negative whole numbers, plus zero. Zero is neither positive nor negative, but a neutral point between the two. Absolute value is always positive, because it measures only the magnitude (distance from zero), not the direction.

My son’s all-time favorite math game, Hit Me is a variation on the traditional gambling game Blackjack, in which players aim for twenty-one points. I originally called the game Zero, but my kids refused to acknowledge such a boring name.

I am often surprised at the score it takes to win a hand of Hit Me. If I have a sum of three or more, I almost always lose, unless I take another card. If I take the maximum number of hits, however, that is a sign of desperation. I remember one game when all the red cards came my way, for a total score of −37, as I kept trying without luck for at least one black number — and my math students laughed and cheered at every hit I took.