Awake, my soul!
Awake, harp and lyre!
I will awaken the dawn.

I will praise you, O Lord, among the nations;
I will sing of you among the peoples.

For great is your love, reaching to the heavens;
your faithfulness reaches to the skies.

Be exalted, O God, above the heavens;
let your glory be over all the earth.

All things were made through him, and without him was not any thing made that was made.

In him was life, and the life was the light of men. The light shines in the darkness, and the darkness has not overcome it.

… Again Jesus spoke to them, saying, “I am the light of the world. Whoever follows me will not walk in darkness, but will have the light of life.”

Speak tenderly to Jerusalem,
and cry to her
that her warfare is ended,
that her iniquity is pardoned,
that she has received from the Lord’s hand
double for all her sins.

A voice cries:
“In the wilderness prepare the way of the Lord;
make straight in the desert a highway for our God.

Every valley shall be lifted up,
and every mountain and hill be made low;
the uneven ground shall become level,
and the rough places a plain.

And the glory of the Lord shall be revealed,
and all flesh shall see it together,
for the mouth of the Lord has spoken.”

In those days Caesar Augustus issued a decree that a census should be taken of the entire Roman world. (This was the first census that took place while Quirinius was governor of Syria.) And everyone went to their own town to register.

So Joseph also went up from the town of Nazareth in Galilee to Judea, to Bethlehem the town of David, because he belonged to the house and line of David. He went there to register with Mary, who was pledged to be married to him and was expecting a child.

While they were there, the time came for the baby to be born, and she gave birth to her firstborn, a son. She wrapped him in cloths and placed him in a manger, because there was no guest room available for them.

And there were shepherds living out in the fields nearby, keeping watch over their flocks at night. An angel of the Lord appeared to them, and the glory of the Lord shone around them, and they were terrified.

But the angel said to them, “Do not be afraid. I bring you good news that will cause great joy for all the people. Today in the town of David a Savior has been born to you; he is the Messiah, the Lord. This will be a sign to you: You will find a baby wrapped in cloths and lying in a manger.”

Suddenly a great company of the heavenly host appeared with the angel, praising God and saying:

“Glory to God in the highest heaven,
and on earth peace to those on whom his favor rests.”

When the angels had left them and gone into heaven, the shepherds said to one another, “Let’s go to Bethlehem and see this thing that has happened, which the Lord has told us about.”

So they hurried off and found Mary and Joseph, and the baby, who was lying in the manger.

When they had seen him, they spread the word concerning what had been told them about this child, and all who heard it were amazed at what the shepherds said to them.

But Mary treasured up all these things and pondered them in her heart.

The shepherds returned, glorifying and praising God for all the things they had heard and seen, which were just as they had been told.

On the eighth day, when it was time to circumcise the child, he was named Jesus, the name the angel had given him before he was conceived.

O Lord, you are my God;
I will exalt you; I will praise your name,
for you have done wonderful things,
plans formed of old, faithful and sure.

He will swallow up death forever;
and the Lord God will wipe away tears from all faces,
and the reproach of his people he will take away from all the earth,
for the Lord has spoken.

Who has believed what he has heard from us?

And to whom has the arm of the Lord been revealed?

He was despised and rejected by men,
a man of sorrows and acquainted with grief;
and as one from whom men hide their faces
he was despised, and we esteemed him not.

Surely he has borne our griefs
and carried our sorrows;
yet we esteemed him stricken,
smitten by God, and afflicted.

But he was pierced for our transgressions;
he was crushed for our iniquities;
upon him was the chastisement that brought us peace,
and with his wounds we are healed.

All we like sheep have gone astray;
we have turned — every one — to his own way;
rand the Lord has laid on him
the iniquity of us all.

By oppression and judgment he was taken away;
and as for his generation, who considered
that he was cut off out of the land of the living,
stricken for the transgression of my people?

And they made his grave with the wicked
and with a rich man in his death,
although he had done no violence,
and there was no deceit in his mouth.

Out of the anguish of his soul he shall see and be satisfied;
by his knowledge shall the righteous one, my servant,
make many to be accounted righteous,
and he shall bear their iniquities.

Therefore I will divide him a portion with the many,
and he shall divide the spoil with the strong,
because he poured out his soul to death
and was numbered with the transgressors;

Yet he bore the sin of many,
and makes intercession for the transgressors.

The people who walked in darkness
have seen a great light;
those who dwelt in a land of deep darkness,
on them has light shone.

… For to us a child is born,
to us a son is given;
and the government shall be upon his shoulder,
and his name shall be called
Wonderful Counselor, Mighty God,
Everlasting Father, Prince of Peace.

Of the increase of his government and of peace
there will be no end,
on the throne of David and over his kingdom,
to establish it and to uphold it
with justice and with righteousness
from this time forth and forevermore.

The zeal of the Lord of hosts will do this.

Christ Jesus who, though he was in the form of God, did not count equality with God a thing to be grasped, but emptied himself, by taking the form of a servant, being born in the likeness of men.

And being found in human form, he humbled himself by becoming obedient to the point of death, even death on a cross.

Therefore God has highly exalted him and bestowed on him the name that is above every name.

So that at the name of Jesus every knee should bow, in heaven and on earth and under the earth, and every tongue confess that Jesus Christ is Lord, to the glory of God the Father. 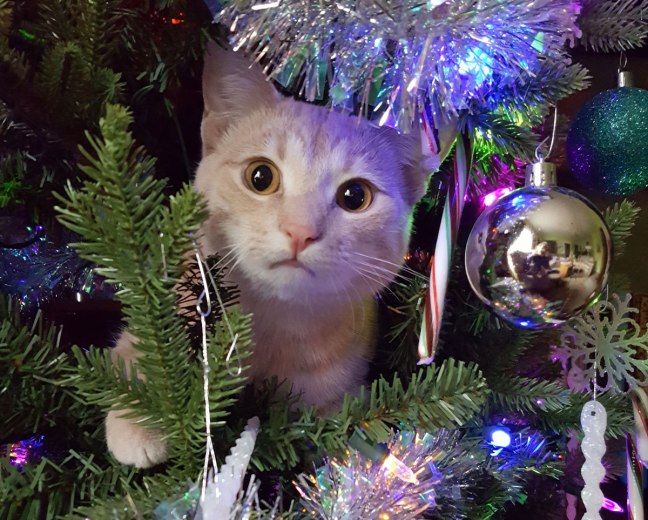 I was going to blog about the new Playful Math Education Carnival, but I ran out of time. Tomorrow, then.

Best wishes for a merry season!

For the promise to Abraham and his offspring that he would be heir of the world did not come through the law but through the righteousness of faith.

For if it is the adherents of the law who are to be the heirs, faith is null and the promise is void.

That is why it depends on faith, in order that the promise may rest on grace and be guaranteed to all his offspring — not only to the adherent of the law but also to the one who shares the faith of Abraham, who is the father of us all — in the presence of the God in whom he believed, who gives life to the dead and calls into existence the things that do not exist.

In hope he believed against hope, that he should become the father of many nations … That is why his faith was “counted to him as righteousness.”

But the words “it was counted to him” were not written for his sake alone, but for ours also.

It will be counted to us who believe in him who raised from the dead Jesus our Lord, who was delivered up for our trespasses and raised for our justification.