Here’s a puzzle your family or class may enjoy…

The “All 2s” Challenge

Use only the digit 2, and try to use as few of them as you can for each calculation. You may use any math operations you know.

You might enjoy practicing your math art skills with this 2-digit challenge from Steve Wyborney.

How many blocks make the digit 2? How did you count them?

Welcome to the 152nd edition of the Playful Math Education Blog Carnival — a smorgasbord of delectable tidbits of mathy fun. It’s like a free online magazine devoted to learning, teaching, and playing around with math from preschool to high school.

Bookmark this post, so you can take your time browsing. There’s so much playful math to enjoy!

We didn’t have a volunteer host for January, so I’m squeezing this in between other commitments. This is my third no-host-emergency carnival in the last year, which is NOT sustainable. If you’d like to help keep the Playful Math Carnival alive, we desperately need hosts for 2022!

By tradition, we start the carnival with a puzzle or activity in honor of our 152nd edition. But if you’d rather jump straight to our featured blog posts, click here to see the Table of Contents.

So here’s your math investigation prompt:

END_OF_DOCUMENT_TOKEN_TO_BE_REPLACED

Once again, the delightful Nrich Maths website offers a seasonal selection of activities to encourage your children’s (and your own!) mathematical creativity.

Click the images below to visit the corresponding December Math Calendar pages.

Here are twenty-four activities for elementary and middle school, one for each day in December during the run-up to Christmas. 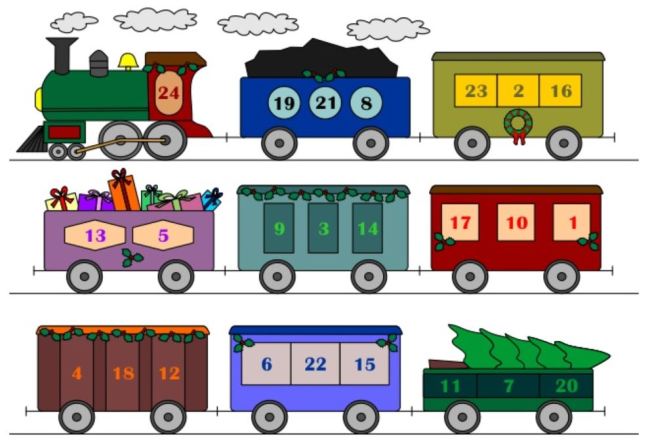 Here are twenty-four favorite activities for middle and high school, one for each day in December in the run-up to Christmas.

I encourage you also to explore my HUGE holiday math post:

Or check out these pages for more ideas: 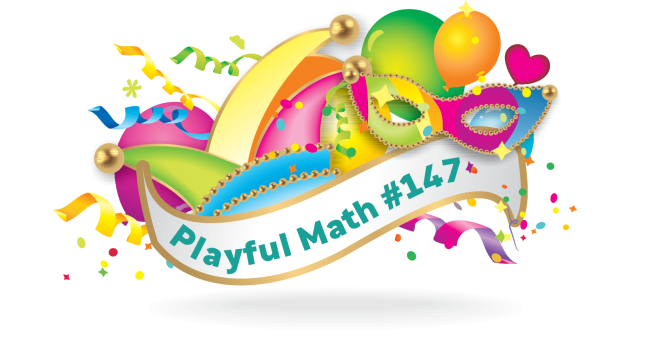 Welcome to the 147th edition of the Playful Math Education Blog Carnival — a smorgasbord of delectable tidbits of mathy fun. It’s like a free online magazine devoted to learning, teaching, and playing around with math from preschool to high school.

Bookmark this post, so you can take your time browsing. There’s so much playful math to enjoy!

By tradition, we start the carnival with a puzzle in honor of our 147th edition. But if you’d rather jump straight to our featured blog posts, click here to see the Table of Contents.

END_OF_DOCUMENT_TOKEN_TO_BE_REPLACED

Welcome to the 144th edition of the Playful Math Education Blog Carnival — a smorgasbord of delectable tidbits of mathy fun. It’s like a free online magazine devoted to learning, teaching, and playing around with math from preschool to high school.

Bookmark this post, so you can take your time browsing.

There’s so much playful math to enjoy!

By tradition, we would start the carnival with a puzzle/activity in honor of our 144th edition. But this time, I want to take a peek back at the history of our carnival.

But if you’d rather jump straight to our featured blog posts, click here to see the Table of Contents.

END_OF_DOCUMENT_TOKEN_TO_BE_REPLACED

My students are so busy that time-consuming math projects are a luxury. How is it possible for older kids to play with mathematics?

Too often, the modern American school math curriculum is a relentless treadmill driving students toward calculus. (Does this happen in other countries, too?)

But that’s definitely not the only way to learn. For most students, it’s not the best way, either.

END_OF_DOCUMENT_TOKEN_TO_BE_REPLACED

With a big election on the horizon, now is a great time to talk about the math of politics.

Does “One person, one vote” make a fair democracy?

Or does it give the majority license to trample a minority?

How can planners arrange voting districts to give everyone the best representation? And is that really what politicians would do, if they had the choice?

Try the Gerrymander Project with your students to investigate these questions and spark real-world mathematical discussion.

[Or buy a copy of my printable activity guide, The Gerrymander Project: Math in the World of Politics, which includes a prepared city map with more detailed instructions, answers, and journaling prompts. My publisher has extended the 10% discount code TBLTOP10 through to Election Day, 3 November 2020.]

Slip your finished map into a clear page protector, so you can mark on it with dry-erase markers. Or make several copies, so you can write on them without destroying the original.

Then Gerrymander Your City

“Gerrymandering” is the American political tradition of adjusting the voting district boundaries to favor one’s own party at the expense of one’s opponents.

The city has hired you to mark out 10 new voting districts of 9 squares each (not counting the neutral squares, which can go in any district). The squares in each district must touch side-to-side, not just meet at a corner.

So now you get to play “political hack.”

First, see how fair you can make the map:

Next, try your hand at gerrymandering, but make sure all the squares in each district stay connected. Can you create ten voting districts that will guarantee:

I’d love to hear your students’ reaction to this project. Please share in the comments section below.

For myself, the more I play with this project, the more I admire the work done by the framers of the U.S. Constitution. Our Electoral College divides the country into “districts” based on state boundaries, giving each a vote roughly proportional to its population — but in a way that slightly strengthens the Minority Party. The system may not be perfect, but it’s done an amazing job through the centuries of maintaining a balance of power, making sure that neither major political party can destroy the other.

Which is NOT to say that our country always protects the rights of true minorities. Clearly, that’s an ongoing struggle.

But overall, the political parties stay relatively balanced, making for a stable government. After more than two centuries, we still have, as Ben Franklin said, “a republic, if you can keep it.” 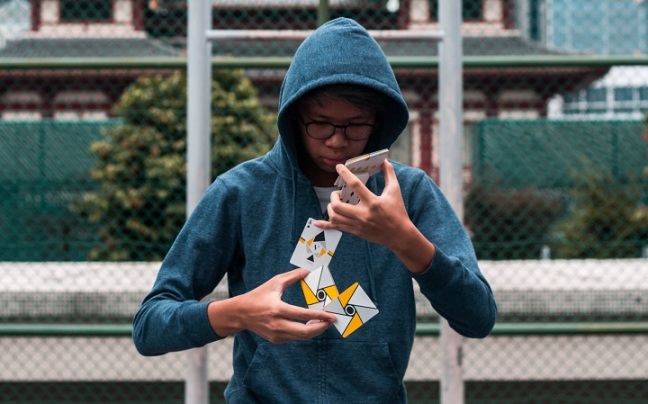 The all-time most-visited page on this site is my post about Math War: The Game That Is Worth 1,000 Worksheets. It’s easy to adapt to almost any math topic, simple to learn, and quick to play. My homeschool co-op students love it.

Take a look at the links below for games from prealgebra to high school trig. And try the Math War Trumps variation at the end of the post to boost your children’s strategic-thinking potential.

END_OF_DOCUMENT_TOKEN_TO_BE_REPLACED 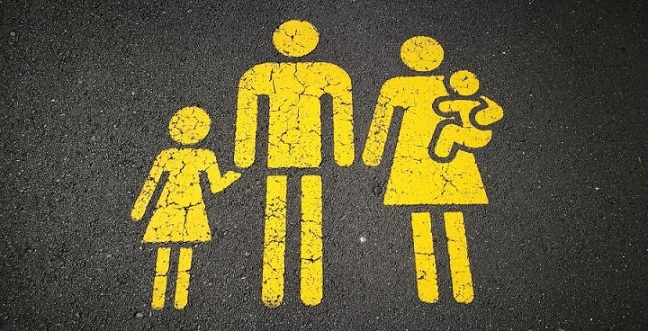 Far too many people find themselves suddenly, unexpectedly homeschooling their children. This prompts me to consider what advice I might offer after more than three decades of teaching kids at home.

Through my decades of homeschooling five kids, we lived by two rules:

Do math. Do reading.

As long as we hit those two topics each day, I knew the kids would be fine. Do some sort of mathematical game or activity. Read something from that big stack of books we collected at the library.

Conquer the basics of math and reading, then everything else will fall into place.

END_OF_DOCUMENT_TOKEN_TO_BE_REPLACED

Did you know that numbers can be polite? In math, a polite number is any number we can write as the sum of two or more consecutive positive whole numbers.

(Consecutive means numbers that come one right after another in the counting sequence.)

For example, five is a polite number, because we can write it as the sum of two consecutive numbers:
5 = 2 + 3

How many other polite numbers can you find?

What Do You Notice?

Are all numbers polite?

Or can you find an impolite number?

Can you make a collection of polite and impolite numbers? Find as many as you can.

How many different ways can you write each polite number as a sum of consecutive numbers?

What do you notice about your collection of polite and impolite numbers?

Can you think of a way to organize your collection so you can look for patterns?

What Do You Wonder?

Make a conjecture about polite or impolite numbers. A conjecture is a statement that you think might be true.

For example, you might make a conjecture that “All odd numbers are…” — How would you finish that sentence?

Can you make at least five conjectures about polite and impolite numbers?

What is your favorite conjecture? Does thinking about it make you wonder about numbers?

Can you think of any way to test your conjectures, to know whether they will always be true or not?

This is how mathematics works. Mathematicians play with numbers, shapes, or ideas and explore how those relate to other ideas.

After collecting a set of interesting things, they think about ways to organize them, so they can look for patterns and connections. They make conjectures and try to imagine ways to test them.

And mathematicians compare their ideas with each other. In real life, math is a very social game.

So play with polite and impolite numbers. Compare your conjectures with a friend.

And check out the list of student conjectures at the Ramblings of a Math Mom blog.