But can you cover the chart with 20 squares? Or with 57 squares? The squares do NOT have to be all the same size.

If we only consider squares with whole-number sides, so they exactly fit on the grid, then:

Click to read the original puzzle along with some teaching tips at Patrick’s blog:

If you’d like some printable hundred charts for coloring in squares, download my free Hundred Charts Galore! file from my publisher’s online store:

And discover more ways to play with these printables in my classic blog post: 30+ Things to Do with a Hundred Chart.

The best way to practice math is to play with it — to use the patterns and connections between math concepts in your pursuit of something fun or beautiful.

So this art project is a great way to practice multiplication. Use the prime factors of numbers from one to one hundred to create a colorful design.

Start with a Hundred Chart

First, download this printable file of hundred charts in non-photo blue (or light gray, if you’re printing in grayscale). The file includes:

END_OF_DOCUMENT_TOKEN_TO_BE_REPLACED 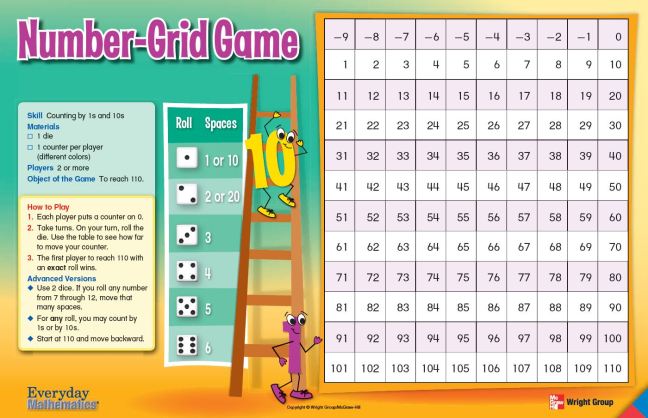 This is a pretty simple game, but it makes a nice variation on the Race-to-100 game for young children who need to work on counting by tens from any number.

You’ll need a 6-sided die, a hundred chart (printables here), and a small token to mark each player’s square. A crumpled bit of colored construction paper works well as a token.

Take turns rolling the die. If you roll:

The first player to reach the final square by exact count wins the game.

Variation #1: For a shorter game, the first player to move off the board wins. You don’t have to hit the final square by exact count.

Variation #2: For a longer game, if you cannot move your full roll forward, you must move backward. Rolling 6 is a “wild card” — you can move any number from one to ten.

Variation #3: Count down. Start at the highest number on your chart and subtract each roll, moving toward zero. If you have a chart like the original shown above, a player whose move goes past zero into negatives will add the number on their next roll.

More Ways to Play on a Hundred Chart

A hundred chart can provide mathematical play from preschool to high school. The list on my blog began many years ago with seven activities, games, and logic puzzles.

Wow, has it grown!

Discover 30+ Things To Do with a Hundred Chart

I’ve been working on my next Playful Math Singles book, based on the popular Things to Do with a Hundred Chart post.

My hundred chart list began many years ago as seven ideas for playing with numbers. Over the years, it grew to its current 30+ activities.

Now, in preparing the new book, my list has become a monster. I’ve collected almost 70 ways to play with numbers, shapes, and logic from preschool to middle school. Just yesterday I added activities for fraction and decimal multiplication, and also tips for naming complex fractions. Wow!

Gonna have to edit that cover file…

In the “Advanced Patterns” chapter, I have a section on math debates. The point of a math debate isn’t that one answer is “right” while the other is “wrong.” You can choose either side of the question — the important thing is how well you support your argument.

Have a Math Debate: Adding Fractions

When you add fractions, you face a problem that most people never consider. Namely, you have to decide exactly what you are talking about.

of one hundred chart
+

of the same chart
=

of that hundred chart

of the pair of charts

That is, you started off counting on two independent charts. But when you put them together, you ended up with a double chart. Two hundred squares in all. Which made each row in the final set worth

of the whole pair of charts.

So what happens if you see this question on a math test:

If you write the answer “

”, you know the teacher will mark it wrong.

Is that fair? Why, or why not?

Counting all the fractional variations, my massive blog post 30+ Things to Do with a Hundred Chart now offers nearly forty ideas for playing around with numbers from preschool to prealgebra.

Here is the newest entry:

(34) The Number Puzzle Game: Rachel created this fun cross between the hundred-chart jigsaw puzzle (#7) and Gomoku (#23). You can download the free 120-board version here or buy the complete set at Teachers Pay Teachers.

Counting all the fractional variations, my massive blog post 30+ Things to Do with a Hundred Chart now offers nearly forty ideas for playing around with numbers from preschool to prealgebra.

(11.5) Play “Odd-‌Even-‌Prime Race.″ Roll two dice. If your token is starting on an odd number, move that many spaces forward. From an even number (except 2), move backward — but never lower than the first square. If you are starting on a prime number (including 2), you may choose to either add or multiply the dice and move that many spaces forward. The first person to reach or pass 100 wins the game.
[Hat tip: Ali Adams in a comment on another post.]

And here’s a question for your students:

Wow! My all-time most popular post continues to grow. Thanks to an entry from this week’s blog carnival, there are now more than thirty great ideas for mathematical play:

(31) Have a math debate: Should the hundred chart count 1-100 or 0-99? Give evidence for your opinion and critique each other’s reasoning.
[Hat tip: Tricia Stohr-Hunt, Instructional Conundrum: 100 Board or 0-99 Chart?]

(32) Rearrange the chart (either 0-99 or 1-100) so that as you count to greater numbers, you climb higher on the board. Have another math debate: Which way makes more intuitive sense?
[Hat tip: Graham Fletcher, Bottoms Up to Conceptually Understanding Numbers.]

(33) Cut the chart into rows and paste them into a long number line. Try a counting pattern, or Race to 100 game, or the Sieve of Eratosthenes on the number line. Have a new math debate: Grid chart or number line — which do you prefer?
[Hat tip: Joe Schwartz, Number Grids and Number Lines: Can They Live Together in Peace? ]

Claim your two free learning guide booklets, and be one of the first to hear about new books, revisions, and sales or other promotions. 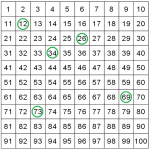 Here’s one more entry for my 20+ Things to Do with a Hundred Chart post, thanks to David Radcliffe in the comments on Monday’s post:

(30) Can you mark ten squares Sudoku-style, so that no two squares share the same row or column? Add up the numbers to get your score. Then try to find a different set of ten Sudoku-style squares. What do you notice? What do you wonder?
[Suggested by David Radcliffe.]

Here’s a new entry for my 20+ Things to Do with a Hundred Chart post:

(29) Blank 100 Grid Number Investigations: Challenge your students to deduce the secret behind each pattern of shaded squares. Then have them make up pattern puzzles of their own.
[Created by Stuart Kay. Free registration required to download pdf printable.]

Math is beautiful when it communicates an abstract idea clearly and provides new insight. Yelena’s hundred chart poster does just that:

[From the Moebius Noodles blog]

Check out my newest home decor item, a hundred chart. The amount of work I put into it, I consider getting it framed to be proudly displayed in the living room. The thing is monumental in several ways:

1. It is monumentally different from my usual approach to choosing math aids. My rule is if it takes me more than 5 minutes to prepare a math manipulative, I skip it and find another way.

2. It is monumentally time-consuming to create from scratch all by yourself.

3. It is monumentally fun to show to a child.

It began with a humble list of seven things in the first (now out of print) edition of my book about teaching home school math. Over the years I added new ideas, and online friends contributed, too, so the list grew to become one of the most popular posts on my blog: