[In the last episode, Alexandria Jones, daughter of the world-famous archaeologist, caught her father’s arch-enemy trying to uncover the Pharaoh’s Treasure.]

…”I can’t believe it!” Simon Skulk threw down the last stone in disgust and walked away. At the mouth of the cave, he turned back and shook his fist. “You haven’t seen the last of me, Alexandria Jones.”

Her muscles aching, Alex sank to the ground and hugged her dog. The she gave him a little push toward the front of the cave. “Rammy, go get Dad.”

Ramus barked once and took off running.

Alex turned back to look at the Pharaoh’s Treasure. Where the last stone had stood was a hole. In the hole lay three wooden sticks, like tent pegs, and a long loop of rope with 12 evenly-spaced knots.

What could it be?

It seemed as though Alex sat there forever, shivering as the desert sun went down, her muscles growing stiff. Then Ramus came bounding into the cave and licked her face.

Her father gave her a hug that chased the stiffness away. Then, Fibonacci Jones* reached into the hole and tenderly lifted out the pegs and rope.

“You found it,” he said. “The Pharaoh’s Treasure! Isn’t it beautiful?”

Alexandria frowned. “But what is it?”

* [What, you were expecting a different name? Do you think I want a lawsuit?]

How to use the rope triangle

You can make your own rope stretcher’s triangle with a piece of string and three straight pins. Tie 11 evenly-spaced knots, about 2 inches (5 cm) apart, and then tie the ends of the string together to make the 12th knot. Getting the knots right is the hardest part. Check your spacing with a ruler or by folding the string several times, to make sure the knots all line up.

Then use the straight pins as your pegs, and use the cardboard back of a spiral notebook or the side of a cardboard box as your ground: 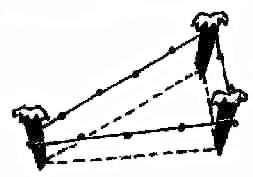 A puzzle for older students

There is another way to form a right angle using ropes and pegs. Can you find it? Play around with your Pharaoh’s Treasure model. You will need an extra rope (or piece of string) to make the square corner using this alternate method.

For this method, the rope stretchers could have used the Pharaoh’s Treasure loop — or they could have used two separate knotted ropes, one longer than the other. You need to find some way to make two lines that are perpendicular to each other.

If you want some hints, try reading Euclid…

If you figure it out, I’d love to hear how you did it. Send me an email, or post your answer in the comments. And if you get stumped, I will put the answer in a “Historical Tidbits” post in a couple of weeks. But don’t give up too quickly! Remember the Math Adventurer’s Rule:

Math Adventurer’s Rule: Figure it out for yourself!

When I tell you the answer, you miss out on the fun of solving the puzzle. Figure it out for yourself—and then check the answer just to prove that you got it right.

Read all the posts from the May/June 1998 issue of my Mathematical Adventures of Alexandria Jones newsletter.

3 thoughts on “The Secret of the Pharaoh’s Treasure, Part 2”