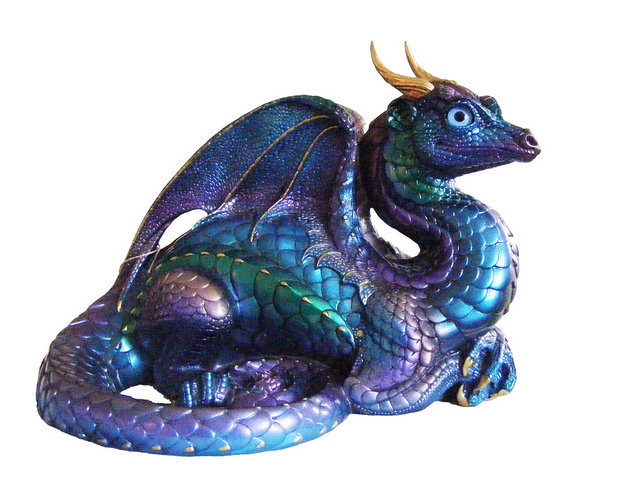 [Dragon photo above by monkeywingand treasure chest by Tom Praison via flickr.] 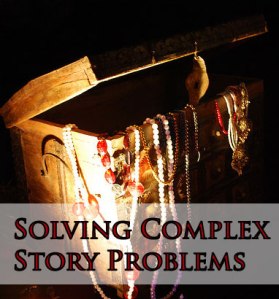 Let’s play around with a middle-school/junior high word problem:

Cimorene spent an afternoon cleaning and organizing the dragon’s treasure. One fourth of the items she sorted was jewelry. 60% of the remainder were potions, and the rest were magic swords. If there were 48 magic swords, how many pieces of treasure did she sort in all?

[Problem set in the world of Patricia Wrede’s Enchanted Forest Chronicles. Modified from a story problem in Singapore Primary Math 6B. Think about how you would solve it before reading further.]

How can we teach our students to solve complex, multi-step story problems? Depending on how one counts, the above problem would take four or five steps to solve, and it is relatively easy for a Singapore math word problem. One might approach it with algebra, writing an equation like:

…or something of that sort. But this problem is for students who have not learned algebra yet. Instead, Singapore math teaches students to draw pictures (called bar models or math models or bar diagrams) that make the solution appear almost like magic. It is a trick well worth learning, no matter what math program you use.

The Whole Is the Sum of Its Parts

All Singapore math bar models descend from one very basic diagram showing the inverse relationship between addition and subtraction. The whole is the sum of its parts. If you know the value of both parts, you can add them up to get the whole. If you know the whole total and one of the parts, you subtract the part you know in order to find the other part. In pictures:

As problems get more complex, the whole may be split into more than two parts. Also, the parts may be related to each other in ways that require a more involved diagram. However complicated the story, however, one usually begins by drawing a bar to represent one whole thing and then dividing it into parts.

In Cimorene’s treasure sorting problem, we start with a bar representing all the treasure she sorted. Pretend that she laid the treasure out in a row on the floor of the dragon’s cave:

The first fact we are given is that 1/4 of the treasure was jewelry. This is easy to show by dividing the bar into four sections and marking one of them to stand for the jewlery:

A Part Becomes a “Whole”

Next we are told that 60% of the remainder were potions. The words of the remainder are easy to overlook, so be careful! These words indicate that we have a new “whole thing.” All the non-jewelry treasure is now going to be treated as if the jewelry did not exist.

The easiest way to show this is to draw a new bar below the original:

The part of this second bar that is left unmarked stands for the magic swords. We know there were 48 magic swords, which are represented by two sections of our bar. These sections are usually called units, and if two of the units are 48, then we can easily see that one unit must represent 24 magic swords.

The Arithmetic Is Easy

As soon as we can connect a unit with a number, the difficult task of thinking through the problem is almost over. From here on, all we need is simple arithmetic. One unit of magic swords is 24 swords. Each unit of potions is the same size, so there are 3 x 24 = 72 potions in all. That makes the total number represented by our second bar (both potions and swords) = 72 + 48 = 120.

Once we know this total, we are well on our way to answering the original question. Notice that the potions and swords together make up three units of the original bar (which represented the whole treasure). If three units are 120, what does one unit of that bar represent? One unit must be 40 pieces of treasure.

Finally, if one of the original units stands for 40 items, then the entire bar means a total of 4 x 40 = 160 pieces of treasure were sorted. That sounds like a busy afternoon’s worth of work to me!

I think the best way to learn to solve story problems is by NOT solving the problems. What I mean is, it is best to begin by looking at a lot of problems and just identifying HOW one would work them, without being distracted by the calculating. Work on learning to apply common sense.

I would not start with the Singapore toughies in levels 5 and 6, however. I suggest buying the Challenging Word Problems level 2 or 3 and working your way up. Level 2 is an easy place to start, if your student is easily intimidated by word problems. When we started in level 2, I would draw the bars—and then after a few weeks of that, my son had to start drawing them, but he didn’t have to do the calculations. We went through most of level 3 that way, gradually getting into more complex diagrams. Near the end of CWP 3 and throughout CWP 4, I made him go ahead and find the solutions. Now, he can work almost anything the Singapore books throw at him.

You can also practice bar diagrams online at the Thinking Blocks site. 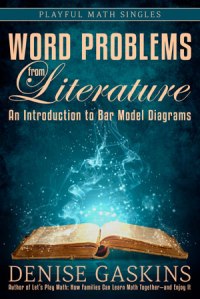 You can help prevent math anxiety by giving your children the mental tools they need to conquer the toughest story problems.

Read an expanded version of Cimorene’s story—and many more!—in Word Problems from Literature: An Introduction to Bar Model Diagrams. Now available at all your favorite online bookstores.

And there’s a paperback Student Workbook, too.