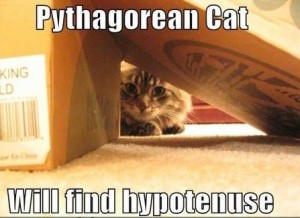 [When Alexandria Jones and her family visited an excavation in southern Italy, they learned several tidbits about the ancient school of mathematics and philosophy founded by Pythagoras. Here is Alex’s favorite story.]

It hit the Pythagorean Brotherhood like an earthquake, a crisis of faith which shook the foundations of their universe. Some say Pythagoras himself made the dread discovery, others blame Hippasus of Metapontum.

Something certainly did happen with Hippasus. The Brotherhood sent him into exile for insubordination, or for breaking the rule of secrecy — or was it for proving the unthinkable? According to legend, Hippasus drowned at sea, but was it a mere shipwreck or the wrath of the gods? Some say the irate Pythagoreans threw him overboard…

Once Upon a Time

Trying to learn about the secretive Pythagoreans is like wading into a swamp of myth and hearsay. But one thing we can’t doubt: The group ran into a serious problem when someone tried to compare the diagonal of a square with its side.

You see, to Pythagoras, number really meant natural number. The only kind of numbers that he recognized were the kind you count with: 1, 2, 3, 4, etc. The Greeks didn’t use fractions as we understand them. Instead, they used ratios to compare two whole numbers. The ratio 2/3 meant “2 compared to 3.”

Think of comparing pizzas to teenagers. “If it takes 2 pizzas to feed 3 kids, how many will we need for a party of 18?”, when translated into ratios, looks like this:

According to Pythagoras, everything in the universe is made out of numbers. Which means the relationship between any two things — from musical notes to the sun and moon — can be described with a ratio.

Then There Was a Problem

But when the Pythagoreans looked at a simple square and its diagonal, they hit a philosophical snag. Of course, they knew by their own Pythagorean Theorem that if the side of the square was

units long, then the diagonal was

But what was the ratio between the diagonal and the side?

Aristotle wrote about the problem almost 200 years later. He explained it something like this:

We can easily put any ratio into lowest terms, so let’s assume that our fraction x/y is in lowest terms. This is important, as you will see.

*[The Pythagoreans would not have explained it with algebra, but that was what they meant. We are using algebra because it is so much more efficient than writing everything out in words, like: “The square constructed on the hypotenuse of a right triangle is equal in area to the sum of the two squares constructed on the legs of that triangle.”]

An Algebra 1 Student Can Do This

Next, square both sides of the equation:

is obviously an even number. Only even numbers are even when squared, so we know that

must also be an even number.

And since our fraction x/y was in lowest terms, it naturally follows that

has to be an odd number.

is even, then it must be double some other number:

And squaring the term inside the parentheses:

Dividing both sides by 2:

is obviously an even number. Only even numbers are even when squared, so we know that

must also be an even number.

cannot be both odd and even — it’s impossible!

Therefore, our original assumption must be wrong. There is no ratio

That means we can never calculate the exact value of

irrational (not ratio-nal). Another famous irrational number is the circle constant

To the Pythagoreans, however, there had to be a ratio. If there were no ratio, then

couldn’t be made of whole numbers, and everything was made of numbers. Wasn’t it?

It was enough to drive a mathematical cultist crazy.

Read all the posts from the March/April 1999 issue of my Mathematical Adventures of Alexandria Jones newsletter.

10 thoughts on “An Ancient Mathematical Crisis”