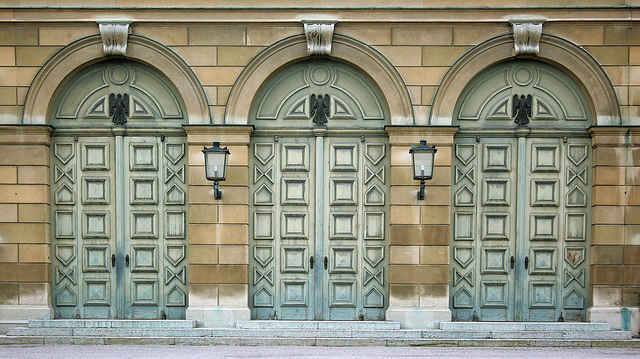 You can get a good argument going in almost any group of people with the infamous Monty Hall problem:

Imagine you are on a TV game show, and the host lets you choose between three closed doors. One of the doors hides a fancy sports car, and if you pick that door, you win the car.

The host opens door #3 to reveal a goat. Then he gives you a chance to switch your door for the unopened door #2.

What if you say you’re going to switch, and then the host offers to give you $5,000 instead of whatever is behind door #2?

Try the game for yourself at the Stay or Switch website.

Most people will say that the game show host, by opening that door, has reset the problem. At the beginning, you had a 1/3 chance of picking the right door, but now you know there was a goat behind door #3, and that new information changes your estimate of probability. The car has to be behind one of the two remaining doors, and they are both equally likely to have the grand prize. It doesn’t matter if you switch, because you have a 50% chance of the car either way.

The best explanation that I’ve seen refuting this argument is the 50 doors (or 50 bowls) demonstration.

Since there was a 2/3 probability that your first choice was wrong but only a 1/3 chance that it was right, you will win twice as often by switching as by keeping your first door.

Still other people claim that the host will never give you the chance to switch to the winning door. He only offers a switch if he knows you picked the right door to start with. So you should never switch.

The true probability of winning the car by switching or not depends on the host: Does he know where the car is? Will he always offer a switch, or only sometimes?

To see all the possibilities, check out this Wikipedia chart.

What About the Money?

Tierney picked Door 1. Mr. Hall opened Door 3, revealing a goat. Tierney was about to switch to Door 2 when Mr. Hall pulled out a roll of bills.

“Three thousand dollars,” Mr. Hall repeated, shifting into his famous cadence. “Cash. Cash money. It could be a car, but it could be a goat. Four thousand.”

How do you think it turned out? Go read the story for yourself.

No other statistical puzzle comes so close to fooling all the people all the time.

— Massimo Piattelli-Palmarini
on the Monty Hall problem, quoted in The Power of Logical Thinking

In no other branch of mathematics is it so easy for experts to blunder as in probability theory.

If the host is required to open a door all the time and offer you a switch, then you should take the switch. But if he has the choice whether to allow a switch or not, beware. Caveat emptor. It all depends on his mood.

Read all the posts from the July/August 1999 issue of my Mathematical Adventures of Alexandria Jones newsletter.

4 thoughts on “How to Start an Argument: The Monty Hall Problem”