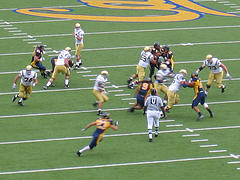 The MIT Mathmen got the ball on their own 20-yard line for the last drive of the game. They were down by 2 points, so they needed at least a field goal to win the game.

Who Won the Game?

If you live outside the U.S., you may need to look up American Football rules to answer these questions.

In American football, where the goalpost is located at the back of the end zone (above the end line), the ten yards of the end zone are added to the yard line distance at the spot of the hold. … In field goal and extra point attempts, the ball is snapped to a holder lined up about seven yards from the line of scrimmage.

Read all the posts from the November/December 1999 issue of my Mathematical Adventures of Alexandria Jones newsletter.

One thought on “A Football Puzzle”