[Feature photo above by Johnmack161 via Wikimedia Commons (CC BY 2.5).]

I first saw place value games on the old PBS Square One TV show (video below). Many teachers have posted versions of the game online, but Snugglenumber by Anna Weltman is by far the cutest variation. Anna kindly gave me permission to use the game in my upcoming Math You Can Play book series, and I added the following variation: 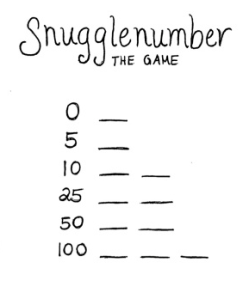 Separate out the cards numbered ace (one) through nine, plus cards to represent the digit zero. We use the queens (Q is round enough for pretend), but you could also use the tens and just count them as zero.

Shuffle well and deal eleven cards to each player. Arrange your cards in the snugglenumber pattern shown here, one card per blank line, to form numbers that come as close to each target number as you can get it.

Score according to horseshoes rules:

For a quick game, whoever scores the most points wins. Or follow horseshoes tradition and play additional rounds until one player gets 21 points (40 for championship games) — and you have to win by at least two points over your closest opponent’s score.

This post is an excerpt from my book Addition & Subtraction: Math Games for Elementary Students, available now from your favorite online book dealer.