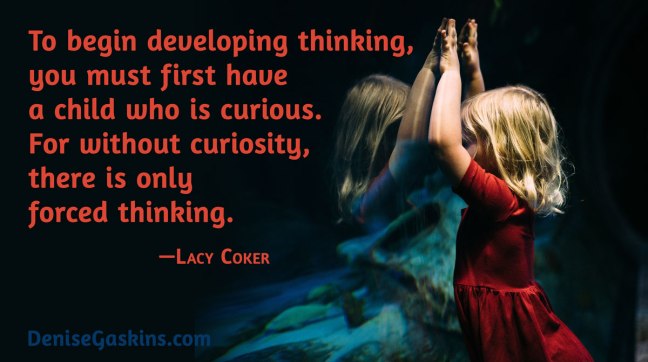 “Cultivating thinking skills is the main reason for teaching math. It is the mind’s perfect playground for shaping up.
…
To begin developing thinking, you must first have a child who is curious. For without curiosity, there is only forced thinking.
…
The problem with traditional math is it jumps to the punchline.
…
Absolutely no mystery or suspense is developed in traditional math books. Why? Apparently, someone thought math was without mystery. That math is a definitive subject of rules and algorithms that all have been discovered.
…
We must persuade children that math is a worthy pursuit through interesting stories, examining quirky math properties, and asking good questions.”

My K-2nd-grade homeschool co-op math class will be following many of the tips in Lacy’s article.

Our topic is “Math Storytime,” so we’ll be starting with picture books, exploring the ideas they bring up, and finding things to notice and wonder about.

I’m looking forward to it.

But picture books aren’t just for little kids. They can be great discussion-starters at any age. Have you enjoyed math books with your students?

I’d love to hear your suggestions! 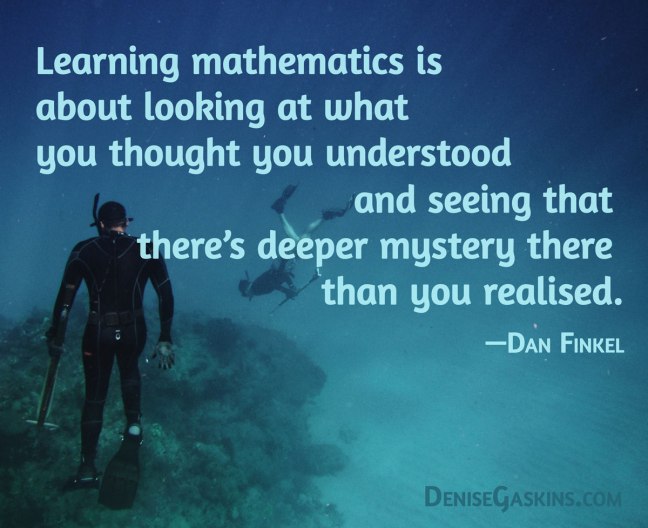 Of all the myths about mathematics, the one I find most blatantly wrong is the idea that some people are just born knowing the answers. In my experience, when you confront a genuine puzzle, you start out not knowing, no matter who you are.
…
Moreover, “knowing” the answers can be a trap; learning mathematics is about looking at what you thought you understood and seeing that there’s deeper mystery there than you realised.

If you’d like to practice learning mathematics by confronting genuine puzzles, Dan’s “A Mathematician at Play” series looks like a wonderful place to start.

Some of these puzzles are classics, others are original. All of them involve some kind of thinking or insight that strikes me as pretty, or surprising, or delightful.

Dan plans to post new puzzles on the Math 4 Love blog every Monday for the next few months. And sharing spoilers on each following Friday, if you want to verify your answers.

“Teach mathematics the way we learn any other subject: Make it visual, make it concrete, not dependent on meaningless, abstract symbols, employ all the senses!
…
If math is such an important subject (and it is) why teach it in a way that is dependent on a child’s weakest mental ability: memory, rather than her strongest mental ability: imagination?”

— Geoff White
The Grade 10 Math Crunch, or Hitting the Wall at Grade 10

How can we stir up our students’ imagination?

Teachers have struggled with this question for years — perhaps since the beginning of the profession.

Consider these comments by W. W. Sawyer in Mathematician’s Delight:

“Earlier we considered the argument, ‘Twice two must be four, because we cannot imagine it otherwise.’ This argument brings out clearly the connexion between reason and imagination: reason is in fact neither more nor less than an experiment carried out in the imagination.

“People often make mistakes when they reason about things they have never seen. Imagination does not always give us the correct answer. We can only argue correctly about things of which we have experience or which are reasonably like the things we know well. If our reasoning leads us to an untrue conclusion, we must revise the picture in our minds, and learn to imagine things as they are.

“When we find ourselves unable to reason (as one often does when presented with, say, a problem in algebra) it is because our imagination is not touched. One can begin to reason only when a clear picture has been formed in the imagination.

“Bad teaching is teaching which presents an endless procession of meaningless signs, words and rules, and fails to arouse the imagination.”

Let’s resolve to have fun with math this year. Ben has posted a preview of 2018’s mathematical holidays. Iva offers plenty of cool ways to think about the number 2018. And Patrick proposes a new mathematical conjecture.

But my favorite way to celebrate any new year is by playing the Year Game. It’s a prime opportunity for players of all ages to fulfill the two most popular New Year’s Resolutions: spending more time with family and friends, and getting more exercise.

So grab a partner, slip into your workout clothes, and pump up those mental muscles!

For many years mathematicians, scientists, engineers and others interested in mathematics have played “year games” via e-mail and in newsgroups. We don’t always know whether it is possible to write expressions for all the numbers from 1 to 100 using only the digits in the current year, but it is fun to try to see how many you can find. This year may prove to be a challenge.

Rules of the Game

Use the digits in the year 2018 to write mathematical expressions for the counting numbers 1 through 100. The goal is adjustable: Young children can start with looking for 1-10, middle grades with 1-25.

My Special Variations on the Rules