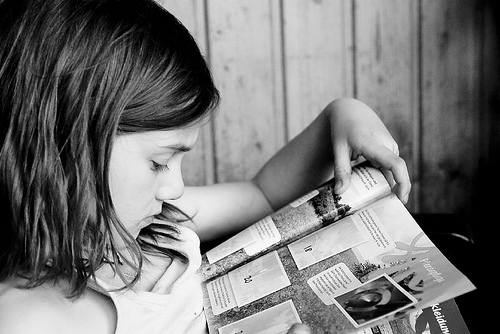 If a girl and a half
can read a book and a half
in a day and a half,
then how many books can one girl read in the month of June?

Kitten reads voraciously, but she decided to skip our library’s summer reading program this year. The Border’s Double-Dog Dare Program was a lot less hassle and had a better prize: a free book! Of course, it didn’t take her all summer to finish 10 books.

How fast does Kitten read?

A ratio is a fraction that is used to compare two quantities. A rate is a special ratio in which the quantities are of different types. Rates are sometimes called this per that ratios.

In every rate problem (until you get to calculus), there is an assumption, usually unstated: Assume that all rates are constant. In our book-reading problem, this means that all books take the same amount of time to read and that Kitten always reads at the same speed. She never gets tired and loses her place or decides to take a day off and go swimming instead.

Simple rate problems involve direct variation: When one part of the problem goes up, the other goes up in the same proportion. When one part goes down, so does the other. If Kitten reads twice as long, she will read twice as many books.

More complicated rate problems involve inverse variation: When one part goes up, the other goes down in the same proportion. If you drive twice as fast, you get to your destination in half the time. Or, in our problem, if there are twice as many girls reading, it will only take half as many days to read the same number of books.

How To Solve Joint Variation Problems

Start with a Chart

So how fast does Kitten read? Let’s put our original word problem into a chart:

Since this is a joint variation problem, we have to think carefully about how the numbers are related. As we work through the relationships, we will add row after row to the chart until we get the answer we want. Don’t try to change all three numbers at once! In each step of our solution, we keep one column the same, and reason out how the other two numbers will change.

Get Rid of the Fractions

books were read in

days, then the whole girl must have read:

And if we doubled the time, she would read twice as many books, getting rid of our final fraction:

Note: The order of steps does not matter, as long as we only change two numbers in each step (and as long as we adjust them properly in relation to each other). One could have started by keeping the girls steady and going up or down with the books —

The Lazy, Hazy Days of Summer

Since there are 30 days in the month of June, and since our readaholic girl is finishing 2 books every 3 days:

Which is why it only took Kitten two weeks to complete the Double-Dog Dare. Thank God for library loan! Without that, I’d never be able to keep her supplied with books.

Want to help your kids learn math? Claim your free problem-solving booklet, and you’ll be among the first to hear about new books, revisions, and sales or other promotions.

One thought on “Rate Puzzle: How Fast Does She Read?”