Photo of Evil Erin times 5 (and dog times 2), via flickr.

Perhaps the biggest challenge for any middle-elementary math student is to master the multiplication facts. It can seem like an unending task to memorize so many facts and be able to pull them out of mental storage in any order on demand. Too often, the rote aspect of such memory work overwhelms students, eclipsing their view of the principles behind the math. Yet rote memory is not enough: A student may be able to recite the times tables perfectly and still be reduced to counting on fingers in the middle of a long division problem.

We will use the world’s oldest interactive game — conversation — to learn the multiplication facts one bite at a time. But first, let’s take some time to think about what multiplication really means.

END_OF_DOCUMENT_TOKEN_TO_BE_REPLACED 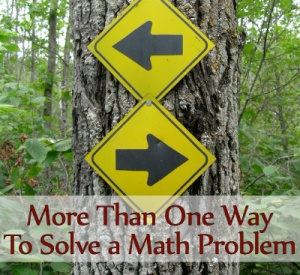 In a lazy, I-don’t-want-to-do-school mood, Princess Kitten was ready to stop after three math problems. We had gotten two of them correct, but the last one was counting the ways to paint a cube in black and white, and we forgot to count the solid-color options.

For my perfectionist daughter, one mistake was excuse enough to quit. She leaned her head against me as we sat together on the couch and said, “We’re done. Done, done, done.” If she could, she would have started purring — one of the most manipulative noises known to humankind. I’m a soft touch. Who can work on math when there’s a kitten to cuddle?

Still, I managed to squeeze in one more puzzle. I picked up my whiteboard marker and started writing:

END_OF_DOCUMENT_TOKEN_TO_BE_REPLACED

If you tried to get any of the Dover samples I linked to last month, and instead you got Dover’s home page, I’m sorry! Apparently the sampler links aren’t stable. 😦 I’ve corrected most of them and deleted those I couldn’t correct, so everything works as of tonight:

I found permanent links for several of the books, but a few of them are still sampler links — especially the children’s books — and those will probably go AWOL as the others did. So if you were planning to download one of the sample pages, be advised to do it soon.

The new Math Teachers at Play blog carnival has plenty of fun for math fans of all ages:

Willkommen! Welcome to the Math Teachers at Play blog carnival! Whether you are a teacher, homeschooler, parent, or a math enthusiast interested in general discussions about mathematics, there is a little bit of something for everyone here. Some of these links came as direct submissions by bloggers, and the others came from my Google Reader.

To start, here are some fun facts about the number 41:

Congratulations to Fibonacci giveaway winners Ken, Judy, Katie, Penney, Rachel, and Charlotte! 🙂 For everyone else, the comments on the Fibonacci post are full of great ideas for combining math and history in your teaching. Readers recommended several books — some of which are among my family’s favorites, and others I’d never heard of (now waiting in my library loan queue). Thank you to everyone who participated in the contests!

You still have a few days to enter my giveaway contest for Keith Devlin’s new e-book, Leonardo and Steve: The Young Genius Who Beat Apple to Market by 800 Years, and his latest print book, The Man of Numbers: Fibonacci’s Arithmetic Revolution. The number of entries so far is low enough that you have very good odds of winning!

Kitten complained that some math programs keep repeating the same kind of problems over and over, with bigger numbers: “They don’t get any harder, they just get longer. It’s boring!”

So we pulled out the Counting lessons in Competition Math for Middle School. [Highly recommended book!] Kitten doesn’t like to compete, but she enjoys learning new ideas, and Batterson’s book gives her plenty of those, well organized and clearly explained.

Today’s topic was the Fundamental Counting Principle. It was review, easy-peasy. The problems were too simple, until…

Pizzas at Mario’s come in three sizes, and you have your choice of 10 toppings to add to the pizza. You may order a pizza with any number of toppings (up to 10), including zero. How many choices of pizza are there at Mario’s?

[The book said 9 toppings, but I was skimming/paraphrasing aloud and misread.]

END_OF_DOCUMENT_TOKEN_TO_BE_REPLACED

Thanks to author Keith Devlin’s generosity, I am giving away FIVE copies of his new e-book Leonardo and Steve: The Young Genius Who Beat Apple to Market by 800 Years (at the end of this review post), PLUS a signed copy of his latest print book, The Man of Numbers: Fibonacci’s Arithmetic Revolution.

Update: Giveaways are over. Congratulations to the winners!

What Leonardo did was every bit as revolutionary as the personal computer pioneers who in the 1980s took computing from a small group of “computer types” and made computers available to, and usable by, anyone. Like them, most of the credit for inventing and developing the methods Leonardo described in Liber Abbaci* goes to others, in particular Indian and Arabic scholars over many centuries. Leonardo’s role was to “package” and “sell” the new methods to the world.

The appearance of Leonardo’s book not only prepared the stage for the development of modern (symbolic) algebra, and hence modern mathematics, it also marked the beginning of the modern financial system and the way of doing business that depends on sophisticated banking methods.

— Keith Devlin
Fibonacci’s ‘Numbers’: The Man Behind The Math
excerpt from The Man of Numbers

* Leonardo of Pisa, also known as Fibonacci, used two b’s in the word “calculation” (abbaci) to distinguish his methods from the use of an abacus.

Can You Solve This Fibonacci Puzzle?

If you want a chance to win a personally signed copy of The Man of Numbers: Fibonacci’s Arithmetic Revolution, all you have to do is solve this riddle.

The Fibonacci sequence arises in the solution to a problem about a breeding rabbit population that Leonardo gave in Liber Abbaci.

But there is evidence that in another book he gave the problem in terms of different creatures.

Hint: The answer is in the e-book, Leonardo & Steve. But this is a no-purchase-necessary contest: There are at least two places to find the answer online, if you search carefully.

Update: I received a wide variety of answers to the Fibonacci riddle, including sheep, mice, donkeys, kittens, chambered nautilus, spiders, cow, dog, fox, sunflowers, humans, and an amoeba. Honeybees were by far the most popular wrong answer. Seven people managed to discover the correct creature. (No, I’m not telling! The answer is in the e-book, and it’s an interesting story to read.) Our official winner is Ken. Congratulations! I’ve sent you an email.

When teachers share stories from the history of math, we help students build a mental picture of the ebb and flow of ideas through the centuries: how men and women wrestled with concepts, made mistakes, argued with each other, and gradually developed the knowledge that today we take for granted.

I taught my Math Club to use a medieval counting board, but still I have trouble imagining the historical setting. What was it really like to work and think in Roman numerals, and then to suddenly learn this new way of calculating? In Leonardo & Steve, Keith draws a parallel between Leonardo’s work and the personal computer revolution — and having lived through the latter helps me understand what it was like when the Hindu number system changed the world.

To the reader today, Leonardo’s text describes something we have been familiar with since our early childhood math classes, but at the turn of the thirteenth century, elementary arithmetic was entirely unknown. When Leonardo was writing his mammoth work, the information it contained was as new to him as to his future readers. In many cases he was working out the examples for the first time ever. He was working them out for himself as much as for his later readers.

In addition to the title characters’ stories in Leonardo & Steve, I found the mystery of the abbacus books interesting. These were small math instruction books for the lay reader, like the Treviso Arithmetic. Hundreds, perhaps thousands, of people across Italy published abbacus books (at first handwritten, later printed) in the years after Leonardo wrote Liber Abaci. And then the books disappeared from history, until scholars rediscovered and began to write about them in the 1960s.

The abbacus books were not written by people doing original mathematics, but by people who learned the new way of working with Hindu-Arabic numbers, found it exciting, and wanted to share it with others. [Sort of like math teacher blogs?]

It would have made sense if the abbacus books had been copied from Leonardo’s Liber Abbaci — but they weren’t. So where did this flood of arithmetic books come from? Keith tells a story of historical forensics, as modern-day literary detectives sift clues to find the original source of the abbacus writings.

Despite the fact that medieval authors copied freely from one another all the time, hardly any of the abbacus books contained any passages from Liber Abbaci. The vast majority of abbacus books, including all the known early ones, had almost nothing in common with Leonardo’s masterpiece. Clearly, the authors of those early abbacus books found their material elsewhere than in the dense pages of Liber Abbaci.

How to Enter the E-book Giveaway

For a chance to win a copy of the e-book Leonardo & Steve (in your choice of format), you have two ways to enter the contest:

You may do both (comment on the questions and link to the giveaway), to double your chances — but please make sure your link is in a separate comment from your answer to the questions, or I may forget to count it separately.

Update: Omitting the comments by Keith Devlin and the blog carnival pingbacks, we had 34 entries in the e-book giveaway. Congratulations to Judy, Katie, Penney, Rachel, and Charlotte. I will forward your email addresses to Keith, and you should be receiving a download code for your e-book soon. Thank you all for participating!

Would You Buy Math History for the Price of a Latte?

If you don’t win the giveaway, Leonardo & Steve is available at Barnes & Noble or Amazon or Smashwords for a mere $2.99. Keith would like to hear your reaction to the book:

As an author, the short, cheap, e-book format is new to me, and I think this is the first ever popular mathematics e-book. So please let me know what you think. In addition to knowing your views of the content, I’m eager to know your reaction to the format and the price. Many fascinating stories about mathematics can be told in 15,000 words, so if authors like myself can get it right, this could be a major part of the future of popular mathematics writing.

— Keith Devlin
Author comment on Leonardo and Steve
[Keith’s name above is an email link, or you can find his email address here.]