Today we have a guest post — an exclusive tale by Sasha Fradkin and Allison Bishop, authors of the new math storybook Funville Adventures. Enjoy! 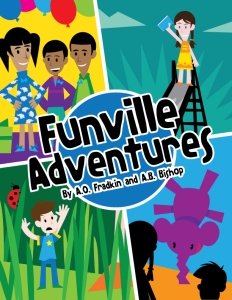 Funville Adventures is a math-inspired fantasy that introduces children to the concept of functions, which are personified as magical beings with powers.

Each power corresponds to a transformation such as doubling in size, rotating, copying, or changing color. Some Funvillians have siblings with opposite powers that can reverse the effects and return an object to its original state, but other powers cannot be reversed.

In this way, kids are introduced to the mathematical concepts of invertible and non-invertible functions, domains, ranges, and even functionals, all without mathematical terminology.

We know about Funville because two siblings, Emmy and Leo, were magically transported there after they went down an abandoned slide.

When they came back, Emmy and Leo shared their adventures with their friends and also brought back the following manuscript written by their new friend Blake.

Hi everyone! My name is Blake and I live in Funville. Before I met my new friends Emmy and Leo, I didn’t know there were places outside of Funville, but now I do! Emmy explained to me that people from her world don’t know about Funvillians and our powers, so she suggested that I write to you and tell you a bit about myself.

Each Funvillian has a special power. My friend Doug’s power is to make things twice as big. He can look at a cookie and make it double in size! Which really isn’t fair but it’s still nice, since he’s good at sharing the now mega-cookies with the rest of us. His brother Harvey can make things twice as small. Sometimes when Doug and Harvey are arguing, they make the same thing big and then small and then big and small over and and over again, which is really quite funny to watch.

My power is to erase things. In comes in very handy when I want to redo a drawing or clean up a spill. But it gets tricky sometimes when I play games.

Games in Funville are the best! I imagine they must go somewhat differently where you are, since in Funville everyone uses their powers while playing. Emmy calls this “cheating,” but we think it’s all in good fun! It makes games very exciting, but it also makes it hard to decide who wins. If my friend Heather uses her power to make the soccer ball too heavy to move when the score is 1-to-1, we usually have to declare a tie and play something else (I suspect she does this whenever she’s bored of playing soccer).

For a while, every time I tried to use my power to play a game, it didn’t work very well. The first time I played checkers I accidentally erased the checkerboard. We drew it back on, but it took awhile, because we had to guess how many squares there should be, and we had to try it a few times before it looked right again. The second time I erased the scoreboard in the fifth inning of a baseball game because I wanted to start over, but then it got dark before we could finish the game.

I don’t even get invited to play Scrabble anymore because I always erase letters I don’t like. I know I probably shouldn’t do this, but I just can’t help myself! And then sometimes I even forget what the letters were by the end of the game, so now we have too many blank scrabble tiles and we don’t know what they should be.

But then Emmy and Leo taught me about games you can play on paper, which we hadn’t been playing in Funville before. Leo taught me how to play tic-tac-toe, and soon everyone in Funville was playing it! Well, I guess not the original version — we had to change it to tic-tac-elephant, so that my friend Constance could play (her power is to turn anything into an elephant).

And Emmy taught me how to play hangman, where you come up with a word and the other players have to try to guess it one letter at a time. Harvey always beats me at that one when he’s guessing, because he keeps making the parts of the hangman so small that I can’t see them and I forget they are there, and so I keep drawing the same arm over and over again while he gets more guesses. And I always beat him when I’m guessing, because I can erase the parts and he forgets, too!

Whenever we play these games, it’s mine to shine — whenever a game is finished, I can erase the paper, and we get to play all over again!

Sometimes it’s tough having a power that can’t be reversed, and I wish I was like Harvey and Doug, who can always undo each other’s mistakes. But other times I’m proud I can erase things. It’s not always what we want, but sometimes a clean slate is exactly what we need.

Your Turn to Play

Dear reader, now it’s your turn to have fun with powers!

Talk with your children about ideas inspired by the Funville Adventures story.

For example, think of one of your favorite games to play on paper. (If you don’t have any, you can think of board games instead.) Would having Blake’s power help in the game?

Blake also mentions his friends Doug, Harvey, and Constance in his story. Would one of their powers be more useful? Or funnier?

Come up with your own powers that you’d like to have while playing each of your favorite games.

For inspiration, enjoy this father’s conversation with his son after reading Funville Adventures.

And if you’d like, you can play The Function Machine Game to experiment with functions of numbers. Be sure to let your kids have a turn making up function rules for you to solve! 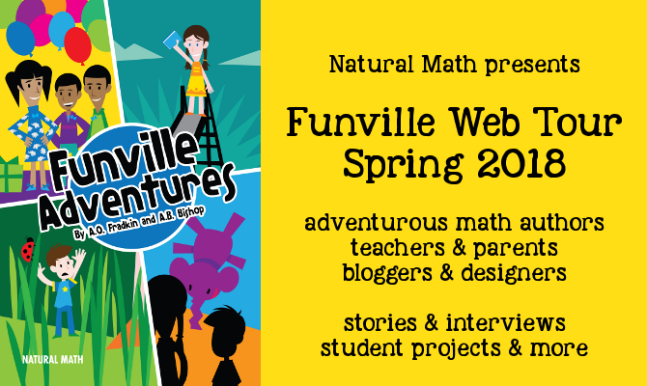 Sasha (A.O.) Fradkin has loved math from an early age and seeks to share that love of math with others. After receiving her PhD in mathematics from Princeton University, she worked for several years as a professional mathematician and taught enrichment math to children ages 4-10 at the Golden Key Russian School. Currently, Sasha is the Head of Math at the Main Line Classical Academy, an elementary school in Bryn Mawr, PA. She develops their math curriculum and teaches children in grades K-5. She writes a blog, Musings of a Mathematical Mom, about her teaching as well as various math adventures with her two daughters, and enjoys pondering exciting and engaging ways to present the beauty of mathematics to young children. 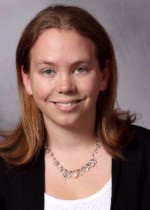 Allison (A.B.) Bishop grew up with a passion for writing and initially disliked math because it was presented as formulaic. She belatedly discovered the creative side of mathematics and science, and now sees it as a vital component of the curiosity that drives her life. She is currently a professor of computer science at Columbia University as well as a quantitative researcher at the Investors Exchange. She remains an avid fiction enthusiast and writer, and is always seeking new ways to expose young minds to creative mathematical thinking and fuel their scientific curiosity.