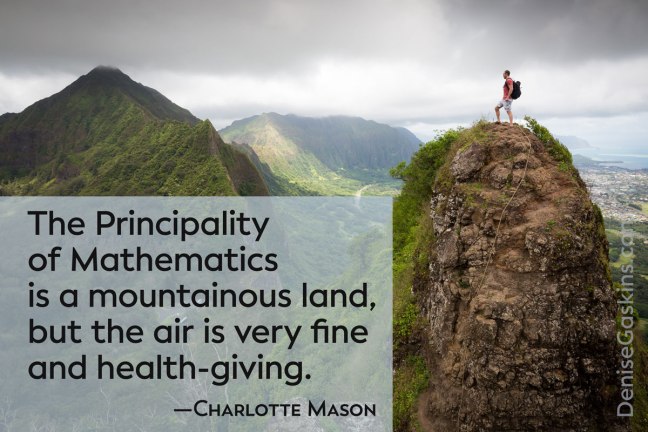 “The Principality of Mathematics is a mountainous land, but the air is very fine and health-giving, though some people find it too rare for their breathing. People who seek their work or play in this principality find themselves braced by effort and satisfied with truth.”

Math was not one of Charlotte Mason’s primary interests. She didn’t think or write as deeply about it as she did other subjects.

She even wrote, “It is unnecessary to exhibit mathematical work done in the P.U.S. as it is on the same lines and reaches the same standard as in other schools.”

This leaves us modern parents and teachers having to read our own interpretations into her words. It should be no surprise when we come to different conclusions. Someday, perhaps, I’ll publish my own vision for a Charlotte Mason approach to homeschooling math.

In the meantime, the following articles describe a method that allows even the youngest children to explore the Principality of Mathematics:

In the years since writing those posts, Sonya and Lacy combined all their ideas into an easy-to-implement program that I think Mason herself would have enjoyed. Here’s my review: