The traditional mathematics professor of the popular legend is absentminded.

He usually appears in public with a lost umbrella in each hand.

He prefers to face the blackboard and to turn his back to the class.

Some of his sayings are handed down from generation to generation.

—George Pólya
How To Solve It

If you’re not familiar with Polya’s work, here’s a 4-page summary of his problem-solving method.

Or check out David Butler’s wonderful Solving Problems Poster, which encapsulates Pólya’s system in a visual, easy-to-follow way that works with younger students, too. 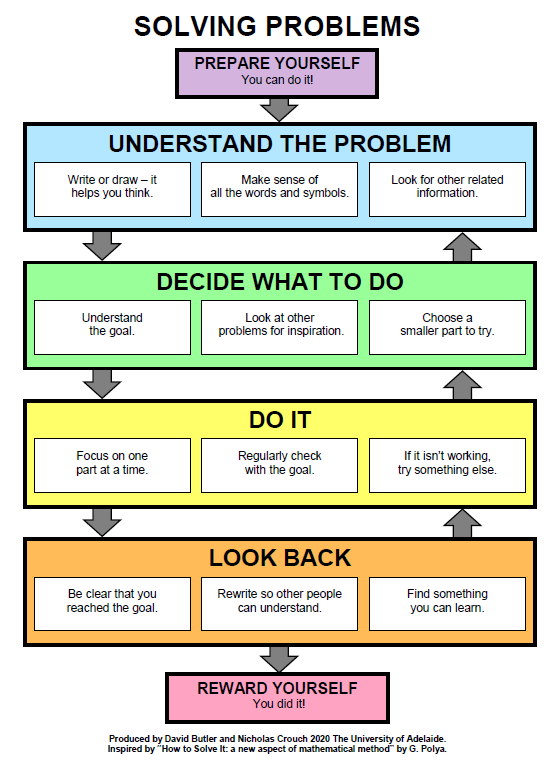 CREDITS: “Professor” cartoon (top) by André Santana via Pixabay.
THE FINE PRINT: I am an Amazon affiliate. If you follow the book link above and buy something, I’ll earn a small commission (at no cost to you).

With the pandemic still raging, most of us will have to adapt our normal holiday traditions to fit the new reality. We may not be able to have a big family gathering (except over Zoom), but we can still enjoy great food.

So for those of you who are planning ahead, here is a mathematician’s menu for next week’s Thanksgiving dinner.

May I suggest some of Don Cohen’s Infinite Cake?

END_OF_DOCUMENT_TOKEN_TO_BE_REPLACED

I couldn’t quite figure out how to fit it into the Playful Math Carnival, but this post made me laugh:

Here’s a bit of fun to brighten up your Monday:

James Grime explains the “Aldebaranian” curve calculator in this video:

And here is the “Map of Mathematistan”. Click to zoom in.

Credit: I contacted @ZoggTheAlien for permission to use the sketch. He said, “Feel free to use it. It’s a Galactic Commons license; you can use it if you don’t claim it’s made by one of your species.”

Please Add Your Comments Below

I just discovered this fun Pi Day song from The Singing Nerd. Definitely need to add him to my YouTube subscriptions.

[Feature photo above by Olga Lednichenko via Flickr (CC BY 2.0).]

This week I have a series of quotes about calculus from my first two years of blogging. The posts were so short that I won’t bother to link you back to them, but math humor keeps well over the years, and W. W. Sawyer is (as always) insightful.

Eldest daughter had her first calculus lesson last night: finding the limit as delta-t approached zero. The teacher found the speed of a car at a given point by using the distance function, calculating the average speed over shorter and shorter time intervals. Dd summarized the lesson for me:

“If you want to divide by zero, you have to sneak up on it from behind.”

This kicked off my week with a laugh:

So You Think You Know Calculus?

Rudbeckia Hirta has a great idea for a new TV blockbuster:

If you cannot see what the exact speed is, begin to ask questions. Silly ones are the best to begin with. Is the speed a million miles an hour? Or one inch a century? Somewhere between these limits. Good. We now know something about the speed. Begin to bring the limits in, and see how close together they can be brought.

Study your own methods of thought. How do you know that the speed is less than a million miles an hour? What method, in fact, are you unconsciously using to estimate speed? Can this method be applied to get closer estimates?

You know what speed is. You would not believe a man who claimed to walk at 5 miles an hour, but took 3 hours to walk 6 miles. You have only to apply the same common sense to stones rolling down hillsides, and the calculus is at your command.

Do your young children have trouble counting in the teens? Try making up Funny Numbers to help them! It’s a great habit to develop, because Funny Numbers will come in handy as mental math tools throughout their school math career.

If you’d like to make your own Happy Math Day post, check out the instructions here: Every Day Is Mathematics Day. And please share a link in the comments section below — I’d love to see what math holiday you invent!

Update: The numbers 11, 12, and 13 form an arithmetic progression. If that sounds too scary for your kids, check out Patrick’s bedtime math discussion Making Progress, Arithmetically.