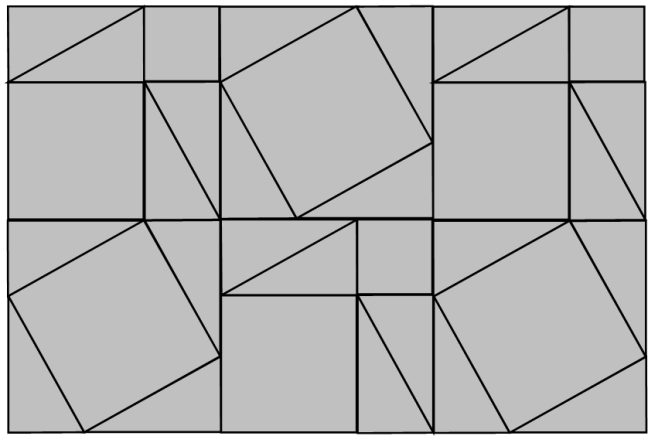 [In the last episode, Alexandria Jones received a letter from archaeologist Sofia Theano, asking for help with a Pythagorean puzzle.]

Dr. Jones suggested that Alex mark the lengths on the side of each square. She called the length of the triangle’s medium-length side

, and the triangle’s short side she named

“Of course,” she said, “the side of both designs is the same:

. If they weren’t the same, they couldn’t fit together to make the mosaic pattern.” 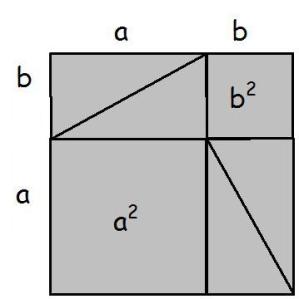 A Question of Area

“And both designs have 4 triangles,” she explained to Leon. “Since the triangles are all the same, we can cancel those out.”

Leon said, “That means those two smaller squares must add up to the same area as the hippopotamus square, right?”

“That’s it!” Alex said. “The square on the hypotenuse is equal to the sum of the squares on the other two sides:

. These patterns prove the Pythagorean Theorem.” 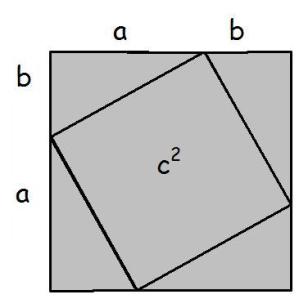 A Question of Angle

Leon frowned. “But how do you know that the tilted

is really a square?”

“Well, you can see that the sides are all the same length,” Alex said. “Each side is the hypotenuse of one of the triangles.”

“But couldn’t it be a rhombus?” Leon asked. “Can you prove for sure that the sides meet at right angles?”

Alex pointed to the side of the second mosaic pattern, where two points of a triangle met. “Any straight line is

are the two non-right angles of a right triangle, they have to add up to

Read all the posts from the May/June 1999 issue of my Mathematical Adventures of Alexandria Jones newsletter.

3 thoughts on “The Pythagorean Proof”