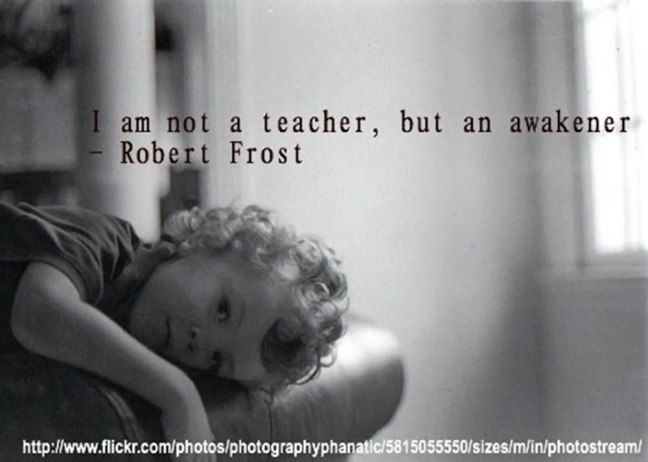 “I used to think my job was to teach students to see what I see. I no longer believe this. My job is to teach students to see; and to recognize that no matter what the problem is, we don’t all see things the same way. But when we examine our different ways of seeing, and look for the relationships involved, everyone sees more clearly; everyone understands more deeply.”

—Joe Schwartz
Then and Now

CREDITS: Feature photo (above) by jenn.davis via Flickr (CC BY 2.0). 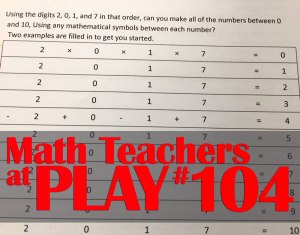 Check out the new carnival of playful math for all ages at Travels in a Mathematical World blog. Each month’s carnival brings you a great new collection of puzzles, math conversations, crafts, teaching tips, and all sorts of mathy fun.

Do you write an education or family blog? Classroom teacher, math coach, homeschooler, parent, college professor, unschooler — anyone interested in helping kids play around with math? Please consider volunteering to host the MTaP blog carnival for one month.

We still need volunteer hosts for most of 2017.

You choose the month that fits your schedule and decide how much effort you want to put in. Writing the carnival can take a couple of hours for a simple post — or you can spend several days searching out and polishing playful math gems to share.

If you want more information, read the MTaP Math Education Blog Carnival home page. Then let me know which month you want.

Video from the Global Math Project.

And here are some additional answers.

Try It at Home

Ask your kids the question: “What Is Math?”

I’d love to hear what they say! 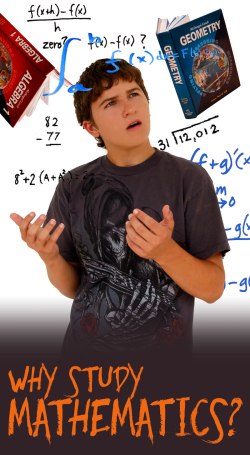 What teacher hasn’t heard a student complain, “When am I ever going to have to use this?” Didn’t most of us ask it ourselves, once upon a time?

And unless we choose a math-intensive career like engineering, the truth is that after we leave school, most of us will never again use most of the math we learned.

But if math beyond arithmetic isn’t all that useful, then what’s the point?

If you or your student is singing the “Higher Math Blues,” here are some quotations that may cheer you up — or at least give you the strength of vision to keep on slogging.

I don’t want to convince you that mathematics is useful. It is, but utility is not the only criterion for value to humanity. Above all, I want to convince you that mathematics is beautiful, surprising, enjoyable, and interesting. In fact, mathematics is the closest that we humans get to true magic. How else to describe the patterns in our heads that — by some mysterious agency — capture patterns of the universe around us? Mathematics connects ideas that otherwise seem totally unrelated, revealing deep similarities that subsequently show up in nature.

That vast book which stands forever open before our eyes, the universe, cannot be read until we have learnt the language in which it is written. It is written in mathematical language, and the letters are triangles, circles, and other geometrical figures, without which means it is humanly impossible to comprehend a single word.

— Galileo Galilei
quoted by Clifford Pickover, A Passion for Mathematics

To Train Our Minds

The investigation of mathematical truths accustoms the mind to method and correctness in reasoning, and is an employment peculiarly worthy of rational beings.

I told myself, “Lincoln, you can never make a lawyer if you do not understand what demonstrate means.” So I left my situation in Springfield, went home to my father’s house, and stayed there till I could give any proposition in the six books of Euclid at sight. I then found out what “demonstrate” means, and went back to my law studies.

In most sciences, one generation tears down what another has built, and what one has established another undoes. In mathematics alone, each generation adds a new story to the old structure.

Biographical history, as taught in our public schools, is still largely a history of boneheads: ridiculous kings and queens, paranoid political leaders, compulsive voyagers, ignorant generals — the flotsam and jetsam of historical currents. The men who radically altered history, the great scientists and mathematicians, are seldom mentioned, if at all.

I will not go so far as to say that constructing a history of thought without profound study of mathematical ideas is like omitting Hamlet from the play named after him. But it is certainly analogous to cutting out the part of Ophelia. For Ophelia is quite essential to the play, she is very charming. . . and a little mad.

— Alfred North Whitehead
quoted in The Viking Book of Aphorisms

To Appreciate the Beauty

A mathematician, like a painter or poet, is a maker of patterns. If his patterns are more permanent than theirs, it is because they are made with ideas. The mathematician’s patterns, like the painter’s or the poet’s, must be beautiful. The ideas, like the colors or the words, must fit together in a harmonious way. Beauty is the first test: there is no permanent place in this world for ugly mathematics.

And Most of All, to Play

Mathematics is a world created by the mind of men, and mathematicians are people who devote their lives to what seems to me a wonderful kind of play!

At age eleven, I began Euclid, with my brother as tutor. This was one of the great events of my life, as dazzling as first love. I had not imagined there was anything so delicious in the world.

I love mathematics … principally because it is beautiful, because man has breathed his spirit of play into it, and because it has given him his greatest game — the encompassing of the infinite.

— Rózsa Péter
quoted by Rosemary Schmalz, Out of the Mouths of Mathematicians

Did you enjoy these? You can find plenty more on my Math & Education Quotations page.

CREDITS: Never Ending Math Problem photo (above) by Danny via Flickr (CC BY 2.0). 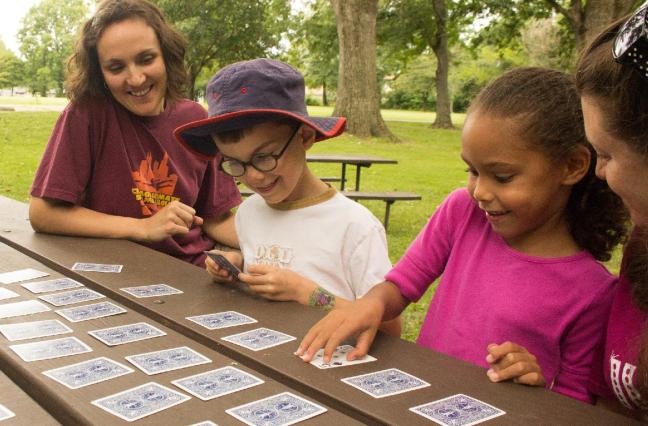 Take a break from textbook math and enjoy yourself!

I like to use games as a warm-up with my co-op math classes. Some homeschoolers make every Friday a game day, and some turn gaming into a family lifestyle. 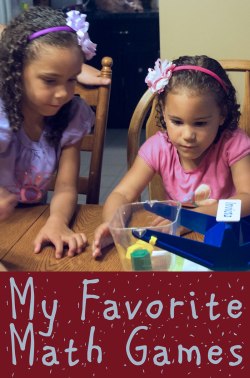 “Playing games with your kids offers a host of educational benefits, plus you build relationships and make memories. I am constantly amazed by the amount of learning that happens when I sit down to play games with my children.”

Family Games for All Ages

“Games put children in exactly the right frame of mind for learning difficult things. Children relax when they play — and they concentrate. They don’t mind repeating certain facts or procedures over and over, if repetition is part of the game.”

“Coming back from winter break can be hard. Everyone is sleepy, unfocused, and daydreaming of the holiday gifts that await them at home after school. And that’s just the teachers!”

“If you play these games and your child learns only that hard mental effort can be fun, you will have taught something invaluable.”

“Mathematics is mental play, the essence of creative problem solving. This is the truth we need to impart to our children, more important than fractions or decimals or even the times tables. Math is a game, playing with ideas.”

Your Turn: What Are Your Favorite Games?

The first way to make your math blog grow is to write posts. Here’s an #MTBoS blog challenge that seems doable: Only one post a week, so maybe even I can keep up.

With the start of a new year, there is no better time to start a new blog! For those of you who have blogs, it is also the perfect time to get inspired to write again! Please join us to participate in this years blogging initiative…

The Math Teachers at Play (MTaP) blog carnival is a monthly collection of tips, tidbits, games, and activities for students and teachers of preschool through pre-college mathematics. We welcome entries from parents, students, teachers, homeschoolers, and just plain folks…

CREDITS: Spiral fractal photo (above) by Kent Schimke via Flickr (CC BY 2.0).]/span> 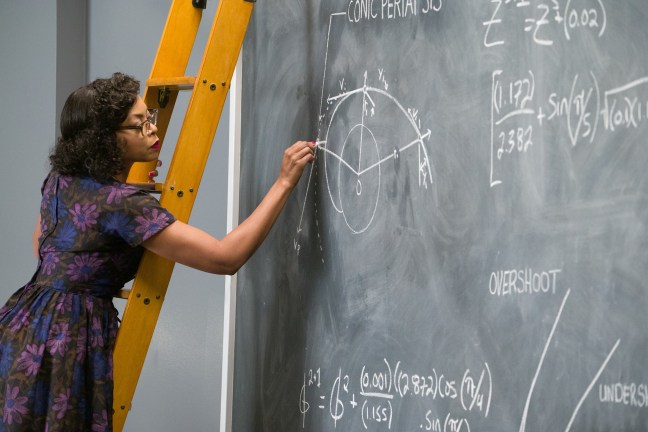 Are you taking your kids to see the movie Hidden Figures? Check out Raymond Johnson’s blog post for references and teaching ideas:

If you know of any other resources, please share in the comments below. And as I find new goodies, I’ll add them to the list below.

Teachers and Students in Action

Before computers were machines, computers were people who computed things. This complicated task often fell to women because it was considered basically clerical. That’s right: computing triple integrals all day long qualified as clerical. 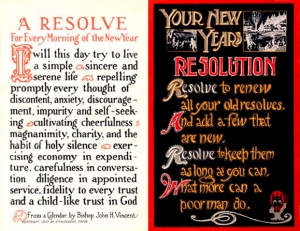 Two of the most popular New Year’s Resolutions are to spend more time with family and friends, and to get more exercise. The 2017 Mathematics Game is a prime opportunity to do both at once.

So grab a partner, slip into your workout clothes, and pump up those mental muscles!

For many years mathematicians, scientists, engineers and others interested in mathematics have played “year games” via e-mail and in newsgroups. We don’t always know whether it is possible to write expressions for all the numbers from 1 to 100 using only the digits in the current year, but it is fun to try to see how many you can find. This year may prove to be a challenge.

Rules of the Game

Use the digits in the year 2017 to write mathematical expressions for the counting numbers 1 through 100. The goal is adjustable: Young children can start with looking for 1-10, middle grades with 1-25.

My Special Variations on the Rules